Liannar, also called the Sunmetal, is a very rare elvish metal imbued with magical properties. The knowledge of its craft appears to belong to the elves. Crafting a weapon out of sunmetal can take years. 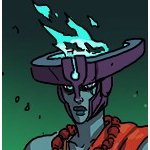