Alive
Kenway, Duke of Aendrim is the Baron of Dalrath, one of the baronies in Vasloria, and Duke of Aendrim. He bears the Shield of Aendrim, a powerful magical artifact and symbol of his right to rule Aendrim.

Kenway was educated at the Imperial University in Capital. 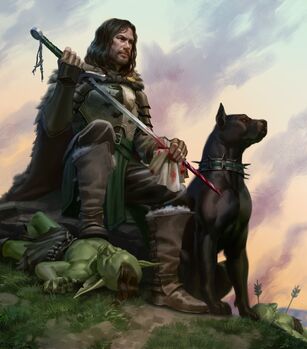 Prior to the events of The Chain, Kenway inherited dominion over the barony of Dalrath in the north of Vasloria. When Kenway was at university, he learned his father was on his deathbed when the Hound arrived at school, 3,000 miles from home.[1]

The Siege of Castle Rend[]

Once Kenway learned of the events that transpired in Bedegar from The Shield of Gravesford, he immediately began plotting to acquire his southern neighbor. Kenway initially planned to simply have the young Edmund, Baron of Bedegar, executed, but then decided to bring him north to Dalrath for protection.

During the Siege of Castle Rend, Baron Kenway took his armies south to support Nekodemus, bringing Edmund with him. Before the battle took place; Kenway, Edmund and Lady Avelina went inside to discuss Kenway's ambitions, alongside Nekodemus and Graves. He explains that he will offer support to Edmund at the price of absolute fealty, which Edmund was uncertain of, as he is only a child. Edmund left it to Nekodemus and Graves to decide the fate of Bedegar, which they agree to Kenway's offer. Lady Avelina then murders Edmund, and Kenway installed Nekodemus as the Baron of Bedegar and had Nekodemus swear fealty.

Now possessing two baronies, Kenway took the Shield of Aendrim from Nekodemus. Kenway then went to Tor to get the Baron of Tor, Ceris, to swear fealty. The negotiation between the two barons is left ambiguous - whether she swore fealty or was executed is unknown - but afterward, Kenway declared himself the Duke of Aendrim. As his ambition expanded he naturally found himself in conflict with Saint Ajax.

Kenway hired The Chain of Acheron to assassinate one of Ajax's most powerful followers, the Archwizard Mortum.

Nekodemus, the Baron of Rend has sworn fealty to the Duke of Dalrath, and for his loyalty, he was anointed Baron of Bedegar after the death of the last rightful heir, Edmund.

The Knight of the Coals[]

Kenway has three knights that act as his chief lieutenants.

He also possesses The Hound of Dalrath, a hellhound and powerful magical creature.

Kenway is a player character from one of Matt's previous campaigns, played by his friend Aaron. Aaron's main goal for the character was to become Duke of Aendrim, which Kenway ultimately succeeded at.

Community content is available under CC-BY-SA unless otherwise noted.
Advertisement