Edit
This section contains planned content. Content in this section has been discussed in worldbuilding streams or other venues outside the game, but might play out differently, and may contain spoilers for future campaign plot points.

Capital, The Greatest City In This Or Any Age, The City of the Great Game, is the largest city in Rioja. 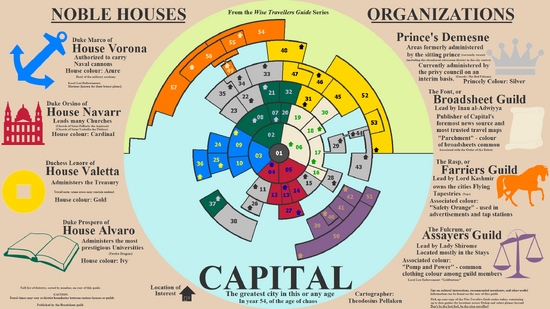 Parts of the City[]

There are several powerful factions vying for control of Capital. Each is presented along with its color on the map.

The Navy (Azure) - Run by House Vorona and led by Duke Marco Vorona.

Imperial University (Ivy) - Run by House Alvaro and led by Duke Prospero Alvaro. Made up of many different colleges.

The Church (Cardinal) - The Church of Saint Ysabella, the Pitiless. Run by Duke Orsino of House Navarr.

Assayer's Guild (Pomp and Power) AKA The Fulcrum - Run by Shirome. Controls goods coming into and out of Capital.

Broadsheet Guild (Parchment) AKA The Font - Run by Inan. Writes and controls the broadsheets, as well as the technology used to print them.

Farrier's Guild (Safety Orange) AKA The Rasp - Controls the Tapestries, magic carpets used for fast transport around the city. Run by Lord Kashmir.

These are the wards the late Prince of Capital controlled directly. They are as yet unclaimed by other factions.

The wards and districts of Capital are designed to be topologically identical to a common starting position in the board game Diplomacy, with the idea that other players might take the roles of these factions operating on the large scale.

The points of interest on the map correspond to power centers, places like the Library or the Citadel that different factions may fight over using their various agents.

Community content is available under CC-BY-SA unless otherwise noted.
Advertisement